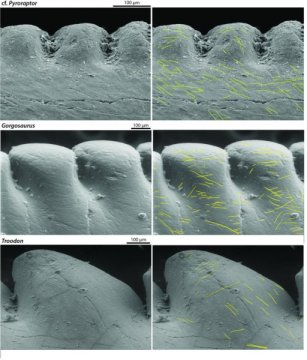 Predatory, bird-like theropod dinosaurs from the Upper Cretaceous of Spain and Canada all relied on a puncture-and-pull bite strategy to kill and consume their prey. But close examination of patterns of wear and modeling of their teeth also suggest that these dinosaurs weren’t necessarily in direct competition for their next meal. Some of them apparently preyed on larger, struggling prey, while others stuck to softer or smaller fare.

Predatory, bird-like theropod dinosaurs from the Upper Cretaceous (100.5-66 million years ago) of Spain and Canada all relied on a puncture-and-pull bite strategy to kill and consume their prey. But close examination of patterns of wear and modeling of their serrated, blade-like teeth reported in Current Biology on April 26 also suggest that these dinosaurs weren’t necessarily in direct competition for their next meal. Some of them apparently preyed on larger, struggling prey, while others stuck to softer or smaller fare.

“All these dinosaurs were living at the same time and place, so it is important to know if they were competing for food resources or if they were aiming for different prey,” says Angelica Torices of Universidad de La Rioja, Spain. “Through this work we [can] begin to understand the interactions between these predatory dinosaurs in the ecosystem a bit better.

“We find that, in general, predatory coelurosaurian dinosaurs bite in the same way through a puncture-and-pull system, but troodontids and dromaeosaurids may have preferred different prey,” she adds, noting that troodontids apparently favored requiring lower bite forces in comparison to dromeosaurs. Coelurosaurians include a group of theropod dinosaurs more closely related to birds than to other dinosaurs, including the allosaurs.

Torices has always had an interest in the teeth of carnivorous dinosaurs. At first, her goal was to match tooth remains to the dinosaur species they had come from. Over time, she grew curious about how various dinosaur species used their teeth, how that related to specific tooth shapes and sizes, and what she might learn about dinosaurs’ lives based on that.

Torices first examined the microwear, or patterns of small scratches on the teeth, to see whether she could establish any pattern in the way various dinosaurs were eating. She, along with colleagues including Ryan Wilkinson from the University of Alberta, Canada, also used a modeling approach called finite elements analysis, commonly used to solve problems in engineering and mathematical physics, to explore how the dinosaurs’ teeth most likely behaved at different cutting angles.

Both approaches led to the same general conclusion, she says. All of the dinosaurs studied employed a puncture-and-pull feeding movement, in which parallel scratches form while they bite down into prey, followed by oblique scratches as the head is pulled backwards with the jaws closed, the researchers report. However, they found, the different tooth shapes performed differently under a variety of simulated biting angles.

The evidence suggests that Dromaeosaurus and Saurornitholestes were well adapted for handling struggling prey or for processing bone as part of their diet. By comparison, Troodon teeth were more likely to fail at awkward bite angles. The findings suggest that troodontids may have preferred softer prey such as invertebrates, smaller prey that required a less powerful bite or could be swallowed whole, or immobile prey such as carrion.

Torices says they are now working to develop more complex models to include teeth along with their roots and jaws to better understand the biting process.

Materials provided by Cell Press. Note: Content may be edited for style and length.