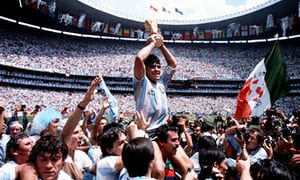 Streaming giant Amazon Prime will throw its weight behind a docuseries that will examine the life of Diego Maradona in the mid-1980s, when he was at the peak of his powers and helped Argentina win the World Cup.

The yet-to-be-named project will “explore the man behind the champion”, according to Amazon, which says the series will offer an “unprecedented look” at a player regarded by many as the greatest of all time and still loved in Naples for helping the city’s Serie A team lift its first-ever league title.

“There are few players whose notoriety transcends generations and geographic border,” said Brad Beale, vice-president of worldwide TV content acquisition at Amazon Prime. “Maradona is a household name around the world, and his career highlights are still discussed today among the biggest moments in soccer’s history.”

“The story will feature an unprecedented look at Maradona, not only as a champion but also as a man,” added producer Francisco Cordero.

This is the second high-profile biographical account of Maradona’s life to be announced. Amy and Senna director Asif Kapadia is working on a Maradona documentary he calls, “the third part of a trilogy about child geniuses and fame”.

Speaking to the Observer in June last year, Kapadia said his film, to be released before the end of 2018, is “a different type of story [compared to Amy or Senna]”, and focuses on “what happens when you get older if you’re a star”.

“The Diego idea actually came about a long time ago, before I’d made Senna. He was in the ether in my brain as a character,” he added. “Again, another person in various ways who felt like he was fighting a system.”

Amazon Prime is about to release a docuseries about Manchester City’s record-breaking season, in which they became the first team to amass 100 points while winning the Premier League.

Billed as a fly-on-the-wall all-access show similar to the American football series Hard Knocks, it comes after Netflix’s Juventus docuseries which followed the fortunes of the Italian champions.