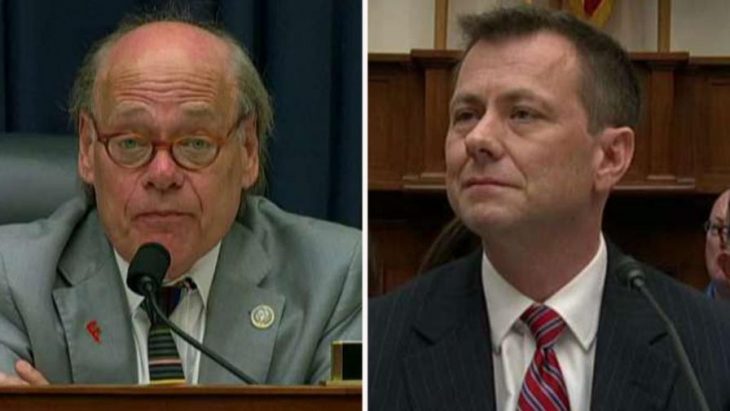 Democratic member of the House Judiciary Committee says Republican attacks on the anti-Trump FBI agent are an attempt to undermine the Russian collusion investigation.

Democratic member of the House Judiciary Committee says Republican attacks on the anti-Trump FBI agent are an attempt to undermine the Russian collusion investigation.

Some veterans in Tennessee say they’re planning a protest march following a congressman’s comment this week that embattled FBI official Peter Strzok deserved a Purple Heart for enduring a House panel’s grilling over allegations of bias against President Donald Trump.

Sean Higgins, an Air Force veteran from Memphis, is leading the upcoming march, the Tennessean reported. Higgins told the paper that many constituents of Democratic U.S. Rep. Steve Cohen are “pissed as hell” after Cohen said Strzok deserved the military award.

“How do you compare someone getting wounded in combat to someone getting in trouble for message he sent? How can Cohen claim (Strzok) get a Purple Heart for that?” Higgins said.

The Purple Heart typically is awarded to members of the U.S. military who are wounded in combat or given posthumously to those killed in combat.

Cohen, 69, defended Strzok, who was being questioned Thursday on Capitol Hill over a series of anti-Trump text messages he sent to his former co-worker and lover, Lisa Page, while investigating Russian election meddling and Hillary Clinton’s email server.

“If I could give you a Purple Heart, I would,” Cohen told Strzok, accusing his GOP counterparts of attempting to undermine Strzok and Special Counsel Robert Mueller’s Russia probe.

Higgins said that 30 veterans have so far committed to marching, including Army veteran Darien Price of Memphis, who told the paper he was “blown away” by Cohen’s statement.

“It is disrespectful to those alive who wear the Purple Heart but especially to families who lost loved ones to who fought for this country.”

“It is disrespectful to those alive who wear the Purple Heart but especially to families who lost loved ones to who fought for this country,” said Price, who was denied his Purple Heart until Cohen’s office stepped in. “Truly saddening.”

Retired Staff Sgt. Johnny “Joey” Jones, a Marine Corps veteran who received a Purple Heart after losing both of his legs and suffering other permanent injuries in an improvised explosive device (IED) blast in Afghanistan, told “Fox & Friends” on Friday that Cohen’s remarks were “disgraceful.”

Following public outcry, Cohen backpedaled on his remarks during a joint hearing Friday.

“I regret mentioning the Purple Heart medal at yesterday’s hearing,” Cohen said. “My intent was to speak metaphorically to make a broader point about attacks against the FBI and Special Counsel Mueller’s investigation into a Russian attack on our country.

I regret mentioning the Purple Heart medal at yesterday’s hearing. My intent was to speak metaphorically&make a broader point re:attacks on Mueller’s investigation into attacks on our country,but I’ve heard from vets & their families–wrong choice of words.https://t.co/FsEuSLjIwd

“I have nothing but the highest respect for members of the armed forces, especially those who have been awarded Purple Hearts, as well as the hard working men and women at the FBI. We are safe because of their service and sacrifice,” he said.

Higgins, a former VA hospital employee in Memphis, told the Tennessean he had previously tried working with Cohen for years in attempts to improve the hospital’s conditions before publicly blowing the whistle.

Higgins, who had been reporting problems in the VA since he was hired in 2007, was fired from his position for the third time in June 2017, and is appealing the firing, WREG-TV in Memphis reported. He appealed his first two firings and was hired back each time.

The march, which is also in protest of the VA hospital’s treatment of veterans, has not been given a date.