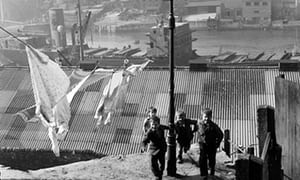 I recall a morning in my Felling childhood. I say to my best friend, Tex, that I want to be a writer. We’ve been serving on St Patrick’s altar. Bread and wine’s been turned to flesh and blood. I still taste the Host on my tongue. We’re on the High Street outside Myers pork shop. A severed pig’s head grins out from its window. There’s the distant din of caulkers from the shipyards far below. It’s a hot day and the sky above is eggshell blue.

“A writer?” says Tex. “But you’re just you, Davie. And this is just the Felling. What the hell ye ganna write about?”

And we wander on uphill, past Dragone’s coffee shop, past the Blue Bell pub, past the allotments on Windy Ridge, and across the great playing fields towards the lark-filled sky.

I don’t really recall the rest of that particular day, but all these years later I continue to wander back there, blending the adult David with the young Davie, drawing together memory, imagination and dream, seeking the tales that grow from that far-off northern corner of the world.

It wasn’t always so. For a long time, I shared Tex’s doubts. I didn’t want to write about that place. Didn’t want to be a northern writer with a northern voice. Thought I’d write about more interesting or exotic places, in some voice that was totally different from my own.

Then I was ambushed by a story called “Where Your Wings Were”, about the death of my baby sister in our little council house at the foot of the town. It generated a whole sequence of stories called Counting Stars. They were set in a Felling that was very like the real Felling but that was also a fiction. Real and imaginary people walked side by side. Real streets led to streets that were totally invented.

Those tales changed everything. I relaxed. Accepted my northern Catholic roots. Discovered Felling’s strangeness and exoticism. I wrote about people and events that might seem insignificant, about tragedies and joys that might seem ordinary. I wrote about a little damaged lovely town that stretches from the river to the sky, and found great beauty in it. I felt myself shifting towards a writing voice that felt something like my own. I began to understand that the extraordinary is found in the most ordinary of places and that the local really does contain the universal. It was only when I returned to that little place that my work began to be read around the world.

Counting Stars led to many other tales and novels inspired by Felling, by Tyneside, by Northumberland, the places that have become the geography of my imagination. I still write stories in the sequence. It’s a life-long project titled Stories From the Middle of the World. And in my new novel, The Colour of the Sun, a boy named Davie wanders through his home town, Felling, on a summer’s day.

My journey away and back again has been taken by many writers. Flannery O’Connor, who struggled with regionalism and Catholicism, gave great comfort on the way: “The discovery of being bound through the senses to a particular society and a particular history, to particular sounds and a particular idiom, is for the writer the beginning of a recognition that first puts his work into real human perspective for him … The imagination is not free, but bound.”

I didn’t know that, back when I was a kid with Tex outside the pork shop. I thought I’d be free as a lark, without understanding that the skylark’s song is sung above a nest that’s scraped into the solid earth.