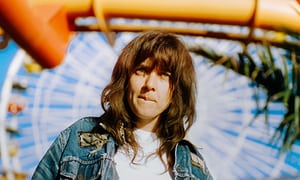 The Australian musician has gone from indie darling to global star, but she’s still uneasy in the limelight and wracked with self-doubt – even self-hate

Many people approach US customs officers with an unreasonable sense of guilt. But it must have been writ large on Courtney Barnett’s face when she handed over her O-1 visa to the officer at Chicago O’Hare International Airport at the beginning of her 2014 tour. “Are you any good?” he demanded

“Not really,” she replied. “Just giving it a go.” He glared through the glass. “You’re supposed to be an ‘alien of extraordinary ability’. Why should I let you in?”

It’s hard to imagine a more stellar trajectory than Barnett’s, but she has always been fame’s accidental tourist. Her 2016 debut album, Sometimes I Sit and Think, and Sometimes I Just Sit, was a string of worry beads – about social disconnection, overthinking and neighbourly relations – that was nominated for a Grammy and a Brit, and won the Australian Music Prize and four Aria awards in her home country. “Put me on a pedestal and I’ll only disappoint you,” she warned in Pedestrian at Best – but that warning fell on deaf ears.

Barnett is stretched out on a chair at her desk at the HQ of Milk! Records, the label she started back in 2012 to release her own EP. Now it’s home to a roster of about 10 acts and situated in the Melbourne suburb of Coburg at an office between warehouses, sari shops and Middle Eastern restaurants.

Today, as always, she walked the 40 minutes to Milk! from the home she shares with her partner, musician Jen Cloher. (Lore has it that a star-struck Barnett yelled out a proposal at one of Cloher’s gigs, years before they met.) She follows Merri Creek some of the way, the grasslands for which she and Cloher put on a conservation benefit gig in 2016. Sometimes lyrics come to her as she walks. Other times she will listen to her demos, or Oprah’s SuperSoul Conversations podcast.

The front room of Milk! is the factory floor: shelves stacked with merch and albums. In the back office there is a rack of 10 guitars belonging to Barnett and Cloher. Barnett’s astronaut suit from her Need a Little Time video dangles from a clothes hanger. Some of her second album was written here: Tell Me How You Really Feel delves deeply into interpersonal relationships and social contracts. “Jen was saying to me that I never tell her how I really feel, and I have close friends that I keep quite an emotional distance from,” Barnett explains. “It’s feeling that disconnect, and how it’s not very helpful.”

Despite her guarded nature, Barnett’s skill is in making even her most specific lyrics relatable. It’s unlikely that the audiences who saw her perform Depreston on The Ellen DeGeneres Show and The Tonight Show were familiar with the Melbourne suburb of Preston, yet she has tapped into a generation literate in depression and anxiety, as well as an older crowd reared on the fine-tuned melancholy of Lou Barlow and Kurt Cobain.

Barnett still sings with the baffled shrug of her previous record, but Tell Me How You Really Feel is a more intense album: take the kettle whistle at the beginning of Hopefulessness, which turns a domestic scene into an existential scream. Then there’s the song Crippling Self-Doubt and a General Lack of Confidence. By way of explanation, she says: “When I’ve done shows and interviews, I’ve noticed myself doing that female thing, of trying to please people even when they say rude things, not speaking up for myself. Small things, which add up and manifest as a bigger self-hatred.”

Barnett at least fought back when it came to internet trolls, writing the single Nameless, Faceless, which features the riposte: “He said, ‘I could eat a bowl of alphabet soup and spit out better words than you.’ But you didn’t.” She says that watching mates like Camp Cope challenge inequality in the music industry has made her more inclined to speak her mind. “I’ve always shied away from verbalising things, and apologising almost for even having an opinion. I’ve realised that’s a weird way to be.”

Not long after the release of Nameless, Faceless, Apple rolled out its Australian iPhone X campaign, which set a video of people celebrating the country’s legalisation of gay marriage to Barnett’s cover of INXS’s Never Tear Us Apart. The YouTube clip received so much negativity that comments were disabled. Barnett says: “I really ummed and ahhed about it, but I did that [advert] because it’s such a mainstream company, just to shove it in people’s faces, and then I saw the most fucking homophobic comments on it.”

On top of this, there’s the inevitable expectation that Barnett and Cloher will create a Dylan-and-Baez-style self-referential canon, particularly because Cloher’s 2017 self-titled album spoke of the challenges of living with a partner whose career has just gone into warp-drive. But Barnett insists her album is not a “response”, even if Cloher sometimes queries if a song is about her. She’s relieved that the pair now share the same management team and can coordinate schedules. It’s not only about the difficulty of maintaining a relationship when someone’s in the US for three months; Barnett also plays guitar in Cloher’s band.

Cloher had previously founded I Manage My Music workshops to help people run their own careers, and has brought her organisational skills to Milk!. They have two casual staff and a bookkeeper, and Barnett works on online elements when she’s on tour. She is used to multitasking. When she first moved to Melbourne from Hobart, she worked in a shoe store, then behind the bar at the Northcote Social Club, and after that an admin job for the Victorian Electoral Commission (“folding the letters that the fines were in”), all the while playing in bands. Having studied drawing and photography at art school, she also designs her own album covers. Now she and Cloher prefer to think of their label as an “artist-run collective”, and it has earned them a dedicated following.

A month after we speak, as a warm-up for the launch, Barnett plays a secret album preview show with around 100 people crammed into Milk! HQ. Under a string of fairy lights, Cloher introduces Barnett by acknowledging all the things her partner would likely not: the huge crowds she has played to and taken in her stride, and the immense pressure she had been under to write the “difficult second album”. In our interview, Barnett had anticipated there would be interest in that pressure, but she also insisted that any interpretation of her songs tends to be a projection of the beholder.

Barnett appears without fanfare. Tonight her band plays Tell Me What You Really Think from start to finish, and in this live setting she is at ease, immersed in her performance. The discomfort snaps back in between songs, so she makes a joke of rushing to the next in order to avoid conversation.

The set winds up with Sunday Roast, a pep-talk to a friend with a sweet “keep on keeping on” refrain that Barnett says she wrote as a pre-teen. The guitar strap is off her shoulder and she is out of the spotlight before the last chord has finished ringing.