The Senator said there was “a level of aggression” from the No side that she found difficult.

Noone speaking at this morning’s Together for Yes event.

SENATOR CATHERINE NOONE has said that Monday’s Claire Byrne Live debate was “a demeaning environment to be in” and that there was “a level of aggression” from the No side that she found difficult to relate to.

RTÉ’s Claire Byrne Live Referendum Special featured a debate on the Eighth Amendment with panelists on either side as well as a partisan audience.

The format was criticised by some with loud cheering and clapping throughout the programme leading to Sinn Féin leader Mary Lou McDonald comparing it to a football match.

Noone, who was chair of the Oireachtas Committee on the Eighth Amendment, yesterday described the show was “poorly planned, disorganised and quite frankly like a circus”.

I have great respect for Claire Byrne but her team let her down tonight – the show was poorly planned, disorganised & quite frankly like a circus.

This kind of TV does not serve the public who wish to be informed of the facts and evidence. #cbLive #8thref

Speaking to reporters today, she added that the clapping and jeering should have been stopped.

“I wouldn’t like to be part of a debate like that again. I thought that it was very inappropriate, the jeering and clapping that went on. I suppose once it started it was difficult for it to stop in a way, but I think it should have been stopped,” she said.

Noone added that there was a particular aggression in the tone of people from the No side who participated in the programme:

I thought that at the mention of Savita Halappanavar’s name the jeering, despite the context, I thought it was reprehensible. I felt it was a demeaning environment to be in honestly and the level of aggression, particular I have to say on the No side, it’s hard to relate to. I think Claire did her best in the circumstances, I think the programme could have been organised a lot better and I would hope other programmes could learn from it certainly. 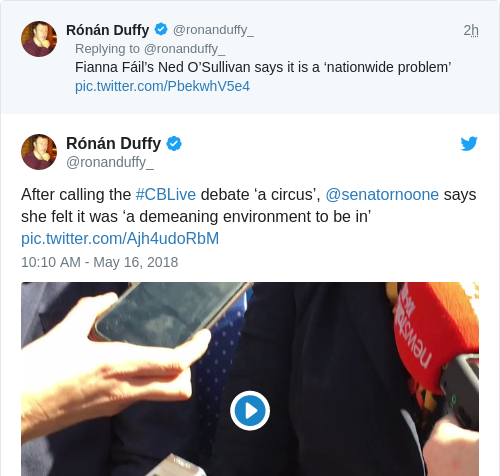 After calling the #CBLive debate ‘a circus’, @senatornoone says she felt it was ‘a demeaning environment to be in’ pic.twitter.com/Ajh4udoRbM

Termination For Medical Reasons (TFMR) said yesterday they felt “dehumanised” after members were invited into the audience but were not given a chance to speak.

RTÉ has confirmed that it did receive complaints about the programme but declined to give details about the number until after the referendum.

The broadcaster added that 650,000 viewers tuned in at some point during the programme on Monday night.

The committee members were campaigning in Dublin this morning.

Noone made her comments this morning at a Together for Yes event alongside four other members of the Oireachtas committee.

The event focused on the geographical spread of Irish women who have travelled to the UK for an abortion with Together for Yes pointing out that this has included women from every county in Ireland.

Fianna Fáil’s Ned O’Sullivan TD said that the issue of abortion is not confined to any social grouping or area but is a problem for everyone in Irish society.

“It’s nationwide problem, there seems to be this myth that it doesn’t happen in rural Ireland. The figures behind me show that that’s not the case. In Co Kerry where I’m from alone, there have been 300 such instances in the period under review,” he said.

We should not try to urbanise or rural divide this particular issue. This is an issue for the Irish people to decide. More importantly it’s an issue about Irish women or Irish girls, be they urban or rural.