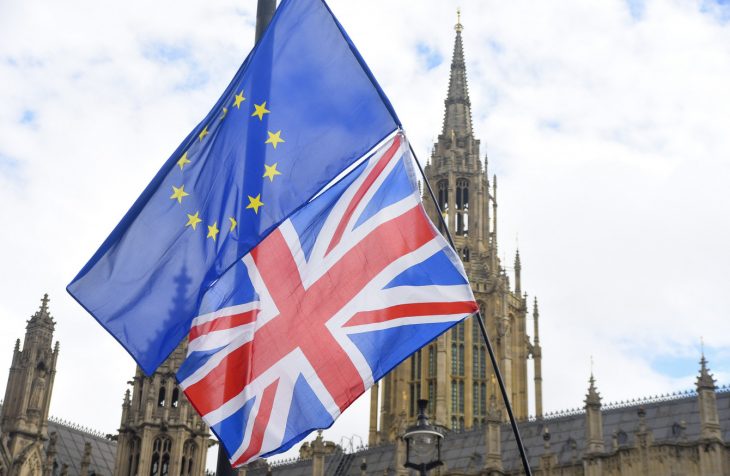 May is due to address parliament today to explain her plan for Britain.

BRITAIN’S BREXIT MINISTER David Davis resigned last night in a major blow for Prime Minister Theresa May as she struggles to unite her party behind a plan to retain strong economic ties to the European Union even after leaving the bloc.

Just two days after warring factions in May’s cabinet approved the plan in a bid to unblock negotiations with Brussels, long-time eurosceptic Davis announced he was stepping down in a letter scathing of the agreement.

“The general direction of policy will leave us in at best a weak negotiating position, and possibly an inescapable one,” he wrote to May.

Friday’s agreement, which came after marathon talks at the Prime Minister’s country retreat, would “make the supposed control by Parliament illusory rather than real”, he added.

Davis was particularly critical of the proposal for a “common rulebook” to allow free trade in goods, saying this “hands control of large swathes of our economy to the EU and is certainly not returning control of our laws in any real sense”.

“I am also unpersuaded that our negotiating approach will not just lead to further demands for concessions,” he said, concluding that his post required “an enthusiastic believer in your approach, and not merely a reluctant conscript”.

May replied in a letter saying that her Brexit plan was in line with her commitment to leave the European single market and customs union.

“I do not agree with your characterisation of the policy we agreed,” she said, asserting that it “will undoubtedly mean the returning of powers from Brussels to the United Kingdom”.

“I would like to thank you warmly for everything you have done over the past two years as Secretary of State to shape our departure from the EU,” she added.

“Brexit in name only”

Davis was appointed two years ago to head up the newly created Department for Exiting the European Union after Britain voted to leave the bloc in a referendum.

He became the public face of Brexit, leading the British delegation in talks with Brussels, although his role had been increasingly overshadowed in recent months as May and her aides took a bigger role in the negotiating strategy.

The 69 year old had reportedly threatened to quit several times over a perceived lack of firmness in Britain’s negotiating stance but had remained strictly loyal to the prime minister in public.

May is due to address parliament today to explain her plan for Britain to adopt EU rules on goods after Brexit, amid anger from MPs in her own party who want a cleaner break and businesses who say it may still cause economic harm.

She is set to tell MPs there have been “robust views” on Brexit among cabinet members and is also expected to announce a replacement for Davis.

Conservative MP Peter Bone said Davis had “done the right thing”, adding: “The PM’s proposals for a Brexit in name only are not acceptable.”

Jacob Rees-Mogg, a leading Brexit hardliner, told Sky News: “This is very important. It raises the most serious questions about the PM’s ideas. If the Brexit Secretary cannot support them they cannot be very good proposals.”

Ian Lavery, chairman of the main opposition Labour Party, said: “This is absolute chaos and Theresa May has no authority left.”

May’s plan would create a free-trade area with the EU for goods, to protect supply chains in areas such as manufacturing, while maintaining flexibility for Britain’s dominant service sector.

It is unclear whether Brussels will accept this, after repeatedly warning Britain it cannot “cherry-pick” bits of its single market.