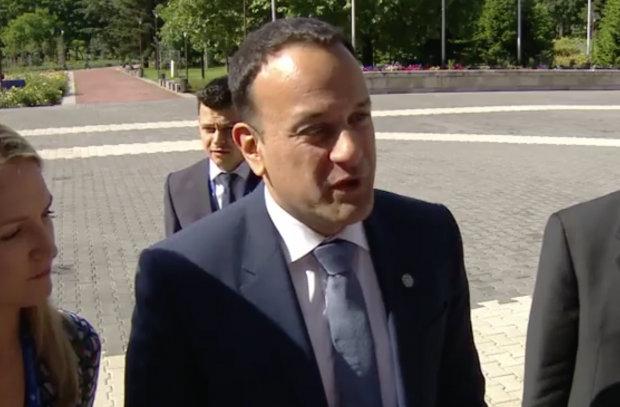 Ireland’s prime minister has raised the spectre of a ‘no deal’ in Brexit talks, warning that Britain has yet to propose anything that “remotely approaches” a “workable and legally operable” solution to the Irish border issue.

Leo Varadkar said if no “substantial” progress was made by ahead of a Brussels summit next month there might be no withdrawal agreement, with Britain crashing out on WTO terms.

The Taoiseach’s intervention comes amid continued deadlock in Theresa May’s Cabinet over how to approach the issue of customs and the border – with the lack of agreement among her own ministers translating into a lack of progress in Brussels.

“If we are not making real and substantial progress by June then we need to seriously question whether were going to have a Withdrawal Agreement at all,” Mr Varadkar told reporters on the doorstep of an EU summit in the Buglarian capital of Sofia.

Earlier this week EU chief negotiator Michel Barnier told the EU27 foreign ministers at a meeting in Brussels that there had been no substantial progress on any of the main Brexit issues since March, and that discussions on the future trade relationship had not even started beyond basic introductory chats.

Mr Varadkar added: “If the UK wants to put forward alternatives to that whether alternative text to the backstop or an alternative future relationship between the UK and the EU, we’re willing to examine that.

“But we need to see it written down in black and white and know that it is workable and legally operable. And we’ve yet to see anything that remotely approaches that.”

Theresa May and Mr Varadkar held a lunchtime bilateral meeting at the Sofia summit on Thursday. The summit’s main topic is the integration of the Western Balkans region, but Brexit, the Iran nuclear deal, and trade have inevitably rearer their heads of the sidelines of the meeting.

The UK Cabinet is divided between two options for customs procedures after Brexit, both of which were presented by the Government in a paper published August of last year.

The EU has already said UK plans for a so-called “customs partnership” are based on “magical thinking” and that a separate, vaguer proposal involving technology called MaxFac (“Maximum Facilitation”) would not prevent a hard border in Ireland.

Both sides say they want to avoid the return of a hard border on Ireland, as secured under the Good Friday Agreement.

The UK and EU also both need to agree how a so-called “backstop” to the Ireland question – which come would into effect if no other solution was found – would work in practice.

Though the backstop was in principle agreed in December, both sides have now begun to interpret the ambiguous text of what they agreed in different ways. Downing Street says the policy would keep the entire UK aligned inside the customs union to prevent a hard border on Ireland, while the EU has said the agreement would keep Northern Ireland in the customs union, and introduce customs checks at Irish sea ports between Northern Ireland and Great Britain.