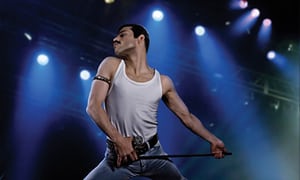 The first full trailer of the long-gestating Queen and Freddie Mercury biopic, Bohemian Rhapsody, has been released onto the internet. Starring Mr Robot’s Rami Malek as Mercury, the band’s exuberant lead singer who died in 1991, anticipation had been stoked on Monday with a short teaser on Queen’s official Youtube channel.

The film has been in the works since at least 2010, when it was announced that Sacha Baron Cohen was to play Mercury; however, Baron Cohen left the project in 2013 citing “creative differences” with Mercury’s former bandmates, with guitarist Brian May later calling Baron Cohen “an arse”.

The project later ran into further difficulties when its director, Bryan Singer, was fired after reportedly taking too much time off for “health concerns”. Eddie the Eagle director Dexter Fletcher was drafted in to replace him midway through production.

The official synopsis describes the film as follows: