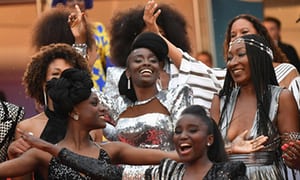 Sixteen female performers have also released a book, titled Being Black is Not My Job

Tired of being asked if they speak “African” and told that they cannot play certain parts such as lawyers, a group of leading black and mixed-race female actors staged a red-carpet protest against racism in French film at Cannes on Wednesday. The demonstration came a few days after a protest by female Hollywood stars and industry figures demanding gender pay equality.

The two groups are among those seeking to capitalise on a period of introspection within the film and entertainment industry that has followed the revelations about Harvey Weinstein, as well as other leading industry figures.

“I was moved to act by the spirit of the times,” said Aïssa Maïga, star of the films Bamako and the African Doctor and a leading member of the 16-strong group of actors that staged a protest at the screening of the South Korean film, Burning.

Maïga told Agence France-Presse news agency that quotas “could be a possible option” for combating the lack of black faces on screen, even if that would spark vehement opposition in France.

The 16 performers, who published a book entitled Being Black is Not My Job earlier this month, were met at the screening by Khadja Nin, the Burundian singer who is sitting on the feature film jury at Cannes this year.

They each chose to wear dresses by Balmain’s mixed-race designer Olivier Rousteing, who told Vogue: “I think we are really at a huge turning point in every industry, whether film, or fashion, or music. We are living in a world where we are trying to break from the past and define what we want from the future. I believe in the power of women, I have since I was a little boy, and this moment means a lot to me.”

In the book, the actors recount stories of the racism they have faced. Nadège Beausson-Diagne, who starred in France’s biggest-ever film at the box office, Welcome to the Sticks, said she had been asked if she spoke “African” at one casting.

She said she was also told: “You can’t play her, she’s a lawyer”; “Luckily, you have fine features and you are not negroid, not too black”; and “For a black, you are really very intelligent. You should have been white”.