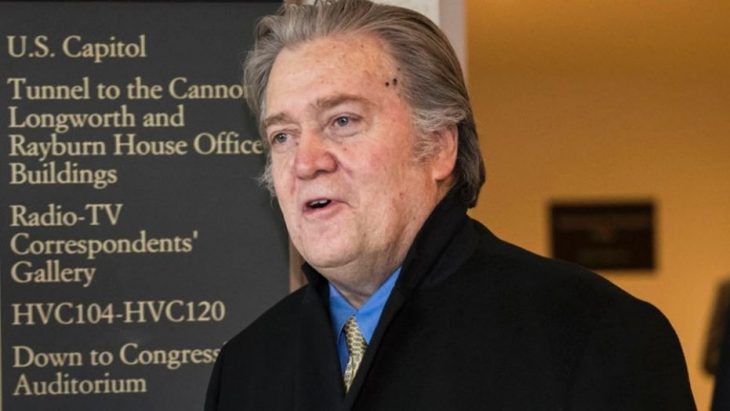 Steve Bannon once again has argued that Dr. Martin Luther King Jr. would “be proud of what Donald Trump has done for black and Hispanic working class.”

Steve Bannon once again has argued that Dr. Martin Luther King Jr. would “be proud of what Donald Trump has done for black and Hispanic working class.”

Steve Bannon took to the airwaves Sunday to claim that The Rev. Martin Luther King would be proud of President Trump.

“Martin Luther King … he would be proud of what Donald Trump has done for [the] black and Hispanic working class, OK?” Bannon told ABC News’ “This Week” Sunday, a claim he’s made before.

Bannon, previously CEO of the Trump campaign and a former executive chairman of Breitbart, has received pushback for his logic, but reiterated again Trump’s America First agenda.

“I was talking specifically about Donald Trump and his policies,” Bannon said Sunday. “His economic nationalism doesn’t care about your race, your religion, your gender, your sexual preference. Here’s what it cares about, that you’re citizens of the United States of America. We have all-time low unemployment among blacks in this country and 20-year low among Hispanics. The black working class and Hispanic working class are now getting the benefits of border security and economic nationalism.”

The Rev. Bernice King, daughter of the legendary American, took offense to Bannon’s previous comments about her father and Trump’s policies; she tweeted in May that her father “would be proud of a livable wage for all and not merely a low unemployment rate.”

She also noted that her father had a global focus, advocating for human rights in general while also fighting for the civil rights of black people in the United States. “Further, he would not refer to people as ‘illegal aliens.’ The term is degrading and does not reflect his belief that we are all a part of the human family,” she tweeted.

She also wrote that her father “would be extremely disturbed by the climate created by leaders, who have emboldened people to easily express and demonstrate cruelty, predominantly toward people of color and immigrants.”

He said his quote was taken out of context. “The lead-in to that was saying, ‘When they can’t fight you on the facts, they’re going to call you racist,’” he said.