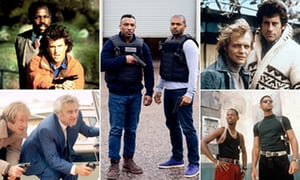 Sky1’s new police drama starring Ashley Walters and Noel Clarke has taken its lead from US counterparts such as Lethal Weapon, but does it work and is it better than The Sweeney?

Most TV cop shows seem to be in love with the “cold open”, where viewers witness a horrible crime and the lead characters enter the story only after the opening credits – usually in a swirl of yellow police tape, white forensic coveralls and pained expressions.

Sky1’s new armed police drama Bulletproof, which launched earlier this week, bucks that trend. If most shows start cold, it comes in hot, kicking off with its plainclothes heroes Pike (Ashley Walters) and Bishop (Noel Clarke) exchanging blows in a boxing ring. The sparring continues even after they hit the showers. Pike jabs at Bishop over his obsession with his hairline; Bishop responds with some below-the-belt banter about Pike’s fondness for cakes.

Within that first minute, we get the picture: these guys are proper buddy-cop partners, their constant bickering just the inevitable bubbling over of a deep wellspring of bromantic love. It also feels more in line with the priorities of the big screen than the small: a common Hollywood screenwriting tenet is to introduce and establish your central characters as quickly as possible. That all seems to chime with the inspirations that helped to shape Bulletproof. Walters and Clarke themselves came up with the original concept and have cited Bad Boys as an early inspiration. It is easy to see the appeal: Michael Bay’s quip-heavy, logic-light 1995 explosion-fest was instrumental in turning Will Smith and Martin Lawrence from TV staples to bankable movie stars in their own right.

The third creator credit on Bulletproof goes to Nick Love, writer/director of notorious hooligan drama The Football Factory and the slick 2012 remake of The Sweeney starring Ray Winstone. Love has made no secret of the fact that his intention with Bulletproof was to direct a UK series that could compete with US shows in terms of bang for your buck, ditching the usual UK procedural trappings in favour of high-octane action. Unlike his two co-writers and stars, Love claims to have never seen Bad Boys but he does point to the original Lethal Weapon – the violent 1987 blockbuster that minted the modern buddy-cop blueprint thanks to Shane Black’s crackerjack script – as a major influence during the making of Bulletproof’s six-episode first season.

The bonnet-sliding antics of Starsky and Hutch are always going to be a more pulse-pounding prospect than, say, Morse and Lewis. So, there is nothing wrong with Bulletproof wanting to be part of the Uzi-waving, quip-firing screen continuum popularised in the US. In the opening brace of instalments, Love cranks up the thrills, staging a large-scale, screeching car chase, an ingenious robbery and various crunching punch-ups. It is big and brash stuff that is matched by the occasionally cocky swagger of its leads.

Yet for all its US-style emphasis on gunplay, Bulletproof is at least as successful when it leans into its Britishness – whether that is a raucous family roast-chicken dinner where the patriarch (in this case, the magnificent Clarke Peters from The Wire) has hit the wine a little too hard – as the relatable street style of its leads. Perhaps it will even find some of the terseness and grit that gives the UK offshoot of buddy-cop TV – typified by shows such as the original Sweeney, The Professionals and Life on Mars – a harder edge than the US original.

In any case, it is gratifying to see two young actors take control of their careers by successfully creating their own vehicle, especially one that positions black men as both leads and positive role models. Bulletproof feels as if it has a decent chance of finding a receptive audience (especially at a time when non-Sky viewers might have renewed a fairweather Now TV subscription to keep up with Westworld).

Bulletproof has also arrived in better shape than its most closely comparable US rival. The producers of the TV adaptation of Love’s beloved Lethal Weapon – which screens on ITV on Fridays – recently fired Clayne Crawford, who for two seasons had grown an increasingly wayward moustache, as Riggs, the volatile cop originally played by Mel Gibson. Crawford will be replaced by Seann William Scott, who will have to try to cook up some chemistry with co-star Damon Wayans from a standing start. If season three of Lethal Weapon begins with Wayans and Scott sparring in a boxing ring, the circle will be complete.

Bulletproof is on Tuesdays Sky1 at 9pm; also available on Now TV