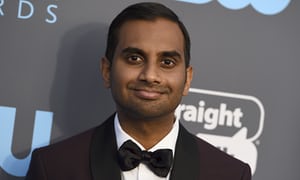 Aziz Ansari has been performing his first standup shows since an allegation of sexual misconduct was made against him. He performed on five nights in the past week at the Comedy Cellar in Manhattan, always appearing as a surprise guest.

In January, the website babe.net published a piece by a woman who had been on a date with Ansari and said she felt pressured by the comedian into sexual activity. The piece sparked widespread debate about sexual misconduct and how bad dating experiences fit into the #MeToo movement. Since then, Ansari has kept a low profile, avoiding social media and public appearances.

The shows at the Comedy Cellar are likely to be seen as a testing ground for a wider comeback. Shows at the venue are not generally recorded, and are often seen as a place for acts to try out material away from critics, but some who saw the show have been telling us about Ansari’s return.

The comedian Sam Morril was supposed to be performing on one of the nights but got bumped for Aziz, joking on Twitter: “Just got bumped by Aziz at the Cellar. It’s legal but he ruins nights!”

He said the set went down very well. “He got a lot of love from the crowd and was killing. Even babe.net would’ve published that it was a lovely night.”

We wondered if Morril, who has a Comedy Central special airing in September, was genuinely upset that he got bumped for Ansari, but he says his tweet was just a joke about how comics get jaded over time. “When you’re brand new, you’re like, ‘Oh my God, Chappelle!’ Then after a few years you’re like, ‘Oh … well, there goes my night.’ But Aziz didn’t do long. Plus, it’s great for the club because big acts like Aziz are one of the reasons why the Cellar is always packed with comedy fans.”

Most audiences seem to have responded to Ansari with enthusiasm. Candy Hernandez said when Ansari got on stage, “everyone seemed to be genuinely excited to see him there. It was as if they had forgotten about babe.net”.

Colton Jordan saw Aziz on a different night, when Tracy Morgan had already performed as a surprise guest. He said “the room exploded” when Ansari came on stage. “His set was great but it was obvious that he was more interested in trying stuff out and than delivering a super tight set. Sometimes there were pauses as he mumbled into the mic and scanned the pages of his notebook.”

Jordan says Ansari made no reference to the allegations made against him, directly or indirectly. That seems supported by most social media posts about the sets. But on the night Hernandez went, she said, she felt there were some oblique references. “He started talking about his outrage fatigue, people protesting businesses because of a few racist employees, and all of the fake outrage on Twitter,” she says. “It seemed as if he was subtly speaking about his experience with the sexual misconduct allegations.”

She said that set wasn’t particularly funny. “The other comedians really brought some of their best jokes, but my friends and I felt like Aziz was the least funny one of them all. There were lots of tourists there, though, so perhaps that may have contributed to his quick acceptance. I can see some New Yorkers not being as welcoming.”

Of course, a few Comedy Cellar attendees excited about seeing a surprise celebrity guest can’t be a bellwether for wider public opinion, should Ansari stage a comeback. But Jordan agrees that overall the New York audience was highly receptive to his return. “I don’t recall a single boo or any other signs of irritation. Tracy Morgan got a great reception earlier but I would say that people were even more excited for Aziz.”