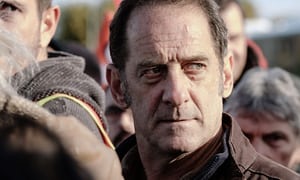 Vincent Lindon is on reliably hardbitten form as a union organiser, in a brutal account of a workforce betrayed by factory management

The title is apt enough. In this movie from French director Stéphane Brizé and starring the rumpled, grizzled screen veteran Vincent Lindon, a fictional but perfectly plausible strike assumes the personality of warfare. It’s a brutal, harrowing conflict in which only one side’s combatants have anything to lose.

This is a stridently, bafflingly cacophonous movie which despite some smart, shrewd touches, is pretty much content with its single note of shouting acrimony and finishes by immolating itself in martyred self-pity. I can’t think of a more defeatist and bizarrely unhelpful ending for anyone who comes to this film interested in the prospect of workers’ rights over neoliberalism. Brizé’s previous Cannes entry with Lindon, The Measure of a Man, had similar ideas but with more subtlety and more heart.

A French factory owned by a company called Perrin Industries is informed of its closure with loss of 1100 jobs. Those 1100 workers had two years previously agreed to a tough pay freeze – effectively unpaid overtime – on a promise that the management was committed to keeping the plant open, an agreement which also allowed the firm to help itself to state subsidies: tax money taken from the workers’ own tiny pay packets. The emoloyees’ efforts had contributed to a handsome company profit which had been divvied up among shareholders. Infuriatingly, the management insists on blandly seeing that as a kind of necessary expense (not a hard-won surplus which has anything to do with the impertinent workers), and to announce that the firm is not “viable”. Then they announce a sellout to a German company, who clearly made this purchase on condition of a lower wage bill. Each Perrin worker is offered €25,000 redundancy, or zero if they continue to strike. They strike.

The union man leading the fightback is Laurent Amédéo, played by Lindon, a passionate speaker and rabble-rouser who is just the guy to lead the troops into a shouty confrontational strike which at first has the blandly mendacious bosses worried. With gleeful scorn, Amédéo rips into the besuited mandarins’ smugly dishonest claim that they are all in it together and their crocodile tears about the situation. He is ironically unimpressed when a German executive airily assures the union of his love for France, and how he loves spending time at his second home in Camargue. At this stage, the title assumes a second, and highly unfortunate resonance.

But having whipped up the anger, Amédéo loses control of it. There is a violent incident against the German CEO. Public and union opinion turns against the now tragic and embattled Amédéo. At this point, anyone watching the film will be entitled to wonder how this fictional strike is going to end. And given its realist mien, with its toughly convincing TV news-style footage, what lesson is to be learned for people in real life who want to defend their jobs? What can a union leader finally do to shame the bosses into submission – or at least some concession?

The ending here is just ridiculous, self-important miserablism: a failure of imagination on the part of Brizé and his co-screenwriter Olivier Gorce. As for Lindon, his performance delivers the required sweaty machismo and he is a resoundingly forthright tribune of the people. But this film rarely if ever lets Lindon shows his humour, his gentleness, his charm. It’s all about actors doing improv shouting in each other’s faces. This is film-making by megaphone.