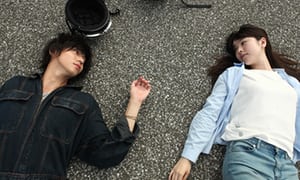 Here is a quibblingly titled movie from Japan that turns out to be an odd doppelganger romance of YA earnestness, directed and co-written by Ryūsuke Hamaguchi, adapted from the novel by Tomoka Shibasaki. It has a kind of counter-Vertigo theme, a tale of mirror-image obsession, but where this kind of thing is usually about the possessive male gaze and passively enigmatic female beauty, here things are reversed. Asako is about the female gaze, and male beauty.

Erika Karata plays Asako, a college student in Kyoto, demure, hardworking, self-effacing and possessed of a doll-like beauty. One day she attends a photographic exhibition and outside chances across Baku (Masahiro Higashide), a fellow student who is hardly less pretty than she is: cool, careless, like the solo breakout star of a boyband. Baku waltzes up to Asako, chats a little and then presumes to kiss her. Within an instant, she is in love, and they are an item, to the dismay of Asako’s loyal pal Haruyo (Sairi Itô), who knows about Baku’s irresponsible-heartbreaker reputation. One day, Baku does precisely what everyone feared: he wanders off and capriciously vanishes from Asako’s life, having evidently dropped out of school.

Cut to two years later, and Asako is working at a coffee shop in Tokyo, which does outside catering at business events. While turning up to clear away the cups and thermos canisters at some conference, she is astonished to see Ryôhei, a nice-looking but rather boring suit-wearing young salaryman. He is the dead spit of super-glam Baku, like his dull twin, and is of course played by the same actor.

She is mesmerised by the resemblance; there is no one around from her home town to confirm her astonishment, and even after chatting to him and scraping up a friendship, she can’t bring herself to confess this deeply strange coincidence to him. And so she embarks on a relationship with poor, unknowing Ryôhei, based on his poignant resemblance to someone much cooler, much sexier and more fascinating who has disappeared like a dream. But then, just as she has forgotten about Baku and is perfectly happy with Ryôhei, and has formed a happy circle of friends in Tokyo based on getting to know him, she sees a very familiar gorgeous face on a billboard and everything is back up in the air.

I wondered if a certain Hitchcockian twist was coming the audience’s way. And you can’t help wondering. People watching a realistic film, set in the recognisable modern world – and not in, say, the magical-twin world of Shakespearian comedy – can’t be blamed for demanding some sort of explanation for a resemblance so exact that the film is using the same actor. And indeed it is great work from Higashide.

Well, I’m not sure that Asako I & II either furnishes an explanation, or styles out the lack of one. But it is an arresting metaphor for a certain phenomenon: settling. Asako wanted sexy love-god Baku, but settled for dependable, reliable Ryôhei in the idealised romantic image she carries around. And in fact it is Ryôhei who is entitled to consider himself as having the supernaturally ideal life: he’s extremely handsome, as well as being nice. But that is not how these things work. We all carry around with us a high school or college memory of heartbreak, and thus preserve around that culprit – always accessible in these social media times – a false romantic cachet. This is an amusing essay in amorous delusion.