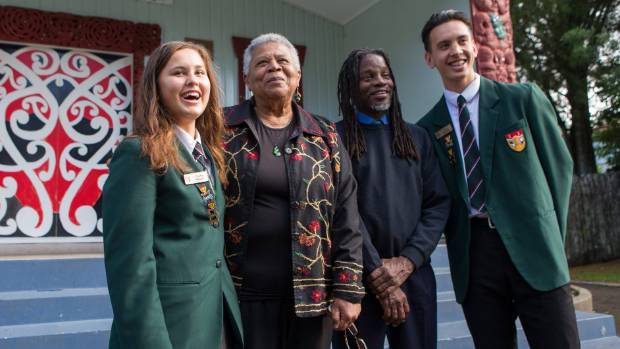 The 76 year old relayed memories of 1957 America to a hall full of Waikato students at Melville High School on Friday.

Brown Trickey was 15 and fed up with her segregated school.

Education at her African-American school was so outdated, she said, the second-hand textbooks from white schools still stated the world was flat.

Segregation had been declared illegal in a 1954 Supreme Court decision. She and the eight other African Americans were making history in the Deep South state.

Although the black students were told they couldn’t play sports, attend drama classes, take music lessons, she was still excited.

She will never forget her first day.

The nine made their way through a side entrance as local cops held back angry whites who yelled and hurled abuse from behind wooden barriers at the front of the school.

“Very few of us had ever seen a mob,” Brown Trickey recalled. “But we heard the mob and it sounded like a very raucous sports event, but it was very dark, a frightening sound of hatred and ‘kill them’ and ‘go back to Africa’.”

At the newly desegregated school, she said there were 20 nice white kids, 200 mean white kids and 1900 silent witnesses.

The mean white students would meet with adults every night to discuss ways to terrorise the African American students during school.

This, however, was nothing compared to the way the African American students were treated.

Gross things were left on their seats, broken glass was scattered on the ground in the showers, temperature dials tweaked so only piercing hot water was available after gym class. Battery acid dripped down on them from upper floors. They were pushed into lockers and had their heels stood on while walking up stairs.

Then there were the death threats, the stones thrown through their homes’ windows, the constant racist remarks.

“The whole idea was to chase us away, and for us to not come back. It was general terror.”

Unfortunately, nothing much has changed today, Brown Trickey said.

“My thoughts on racism is it is a learned behaviour. It is taught to us and we have never taken the time to unlearn that.”

She said there is still segregation based on class and colour.

“But the progress being made is the fact that the truth is being told now like never before, with books and social media.

“But it’s still lacking and people need to unlearn those things that were taught long ago,” she said.

After being expelled from Little Rock Central High School for calling another girl “white trash”, she went on to university and studied journalism and then indigenous social work. She is heavily involved as a social justice activist, environmental activist and works with indigenous cultures in America.

She said the Little Rock Nine still keep in touch and meet up at awards, anniversaries and for workshops and functions.

Their kids have all become friends – “but they accuse us of being teenagers when we get together”, Brown Trickey said, laughing.