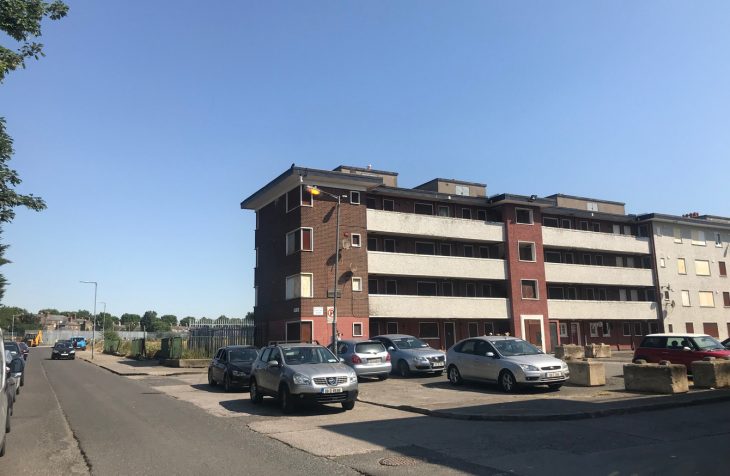 The first phase of the development will deliver 56 homes.

AFTER MANY YEARS of promises and plans to redevelop O’Devaney Gardens, the turning of the sod on the first phase in the regeneration development took place this morning.

The first phase will deliver 56 social homes with a budget of more than €20 million. The overall re-development will deliver approximately 600 homes, with a mix of social, affordable and private homes.

O’Devaney Gardens is one of three development sites that Dublin City Council owns and offers the combined potential to provide over 1,600 homes. The other two sites are at St Michael’s Estate in Inchicore and at Oscar Traynor Road in Coolock.

There have been plans going spanning more than a decade to regenerate the O’Devaney Gardens complex in north Dublin. Regeneration was talked about since the late 90s. Redevelopment plans were put forward around 2003, and the first concrete plans took shape around 2006.

The flats were built in the 1950s to provide an alternative to the poor-quality houses many council tenants lived in and consisted of 278 residential units in 13 four-storey blocks.

Like many housing developments of the era, the O’Devaney Gardens complex lacked many facilities and suffered from anti-social behaviour such as drug-taking and underage drinking.

As the economy picked up during the Celtic Tiger, Dublin City Council pledged to regenerate the flats and again looked for help from a private developer. A plan was developed to tear down the flats and build more than 800 new units.

However, in May 2008, as the economy took a turn, McNamara’s Castlethorn Construction, who were tasked with the project, decided not to go ahead with the plan and several other public-private partnerships, citing ”substantial” changes in the housing market.

In 2016, nine of the 13 blocks were demolished, with the remaining units left in a poor state of repair.

Speaking to TheJournal.ie, local resident Lorraine Douglas said she has been sitting on community forums about the redevelopment of O’Devaney Gardens since 1992.

Douglas said she has seen many launches and re-launches in the housing estate, but today she is confident that homes will be delivered.

“I am confident, they have to do something at this stage,” she said, adding, “if there isn’t something done in the next six weeks there will be protests”.

Over the years, she said living on a derelict site has been “depressing”.

Today, Housing Minister Eoghan Murphy thanked the locals for their patience over the years.

During the turning of the sod, Minister Murphy said:

It is also a good day for the regeneration of this area. Regeneration goes beyond mere bricks and mortar and in order to be successful and sustainable in the long-term, requires the re-building of a community and a strengthening of community bonds.

These new social homes will be built to the latest standards and the highest quality and I’m sure the tenants will be delighted with them when they are finished. Arrangements are well in train to complete the development of the remainder of the site.

Minister for Finance, Public Expenditure and Reform, Paschal Donohoe said he remembers the day the news broke in 2008 that the development had stalled.

He said the regeneration of O’Devaney Gardens “will provide much-needed social and affordable homes in a thriving quarter of the nation’s capital”.

With reporting by Paul O’Donoghue and Fora.ie