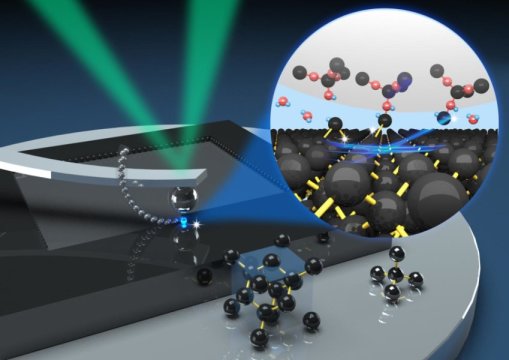 A precise, chemical-free method for etching nanoscale features on silicon wafers has now been developed.

A precise, chemical-free method for etching nanoscale features on silicon wafers has been developed by a team from Penn State and Southwest Jiaotong University and Tsinghua University in China.

In standard lithography, a photosensitive film is deposited on a silicon wafer and a pattern called a mask is used to expose certain portions of the film. Then, chemicals — such as a potassium hydroxide solution — etch patterns into the silicon. Further steps are required to smooth out the roughened surface.

The Penn State and Southwest Jiaotong University researchers developed an entirely different, chemical- and mask-free, one-step process. They lightly rubbed a rounded silica tip of an instrument called a scanning probe microscope across a silicon substrate — the material base typically used to make electronic devices. When exposed to the water vapor in air, the top layer of silicon forms bonds with the tip of the scanning probe, and a single layer of atoms slides off as the probe moves across the silicon. Because the atoms below do not take part in the chemical reaction, they are completely undamaged.

People in nanofabrication who are trying to reduce the size of device features down to atomic-scale dimensions could find this technique useful, Kim believes.

“Atomic layer etching can provide the depth resolution that people would like to get without the use of sacrificial layers and harsh chemicals,” he said.

This kind of patterning method is too slow for microfabrication now, Kim acknowledged. However, researchers could use it to create a platform for testing electronic and microelectromechanical devices with features at the Angstrom or single-atom scale, far smaller than current devices. At least one company, IBM, has experimented with multiple probe arrays that could lead to large-scale patterning of devices.

“Our process could be combined with their process to scale up,” Kim said. “This is the initial science part. Once we see the science, a lot of possibilities can be explored. For instance, we think this technique will work with other materials beyond silicon.”

Materials provided by Penn State. Original written by Walt Mills. Note: Content may be edited for style and length.