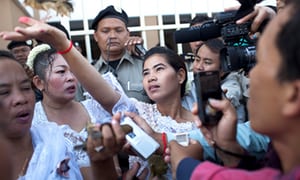 In 2013, thousands took to the streets in Cambodia protesting against the re-election of long-serving prime minister Hun Sen in what some optimistically saw as shoots of a “Cambodian spring”. Christopher Kelly’s sprawling documentary, filmed over six years, is an honest and engrossing portrait of three grassroots activists, a trio of Davids taking on the might of Goliath. There’s gripping human drama here, but the absence of a voiceover limits the film’s accessibility to those already interested in Cambodia; there are just a few snippets of background information on intertitles.

One of those Kelly follows is Luon Sovath, a Buddhist monk nicknamed “the multimedia monk”, well-known for filming police intimidation and violence on his smartphone, dressed in saffron robes. Meanwhile, in Phnom Penh, two young mothers, Tep Vanny and Toul Srey Pov, become leaders of the “housewife activists” of Boeung Kak, a lake community battling forced evictions from their homes on valuable real estate. As the diggers move in, filling the lake with sand and flooding houses, the city’s governor pays a visit; he barely bothers to hide his boredom. Kelly charts the evolution of the women from shy, embarrassed pubic speakers to activist warriors pulling off media-grabbing stunts.

Unshrinkingly, he keeps the camera rolling as the two women bitterly fall out, their solidarity in tatters. Vanny, as the only one of the group who speaks English, becomes their figurehead, travelling to New York to receive an award at a ceremony attended by Hillary Clinton, causing jealously and resentment. There is an uncomfortable truth here about how protest movements divide and splinter. In the end this is a film more about activism than Cambodian politics, how ordinary people find their voices and learn how to use them.