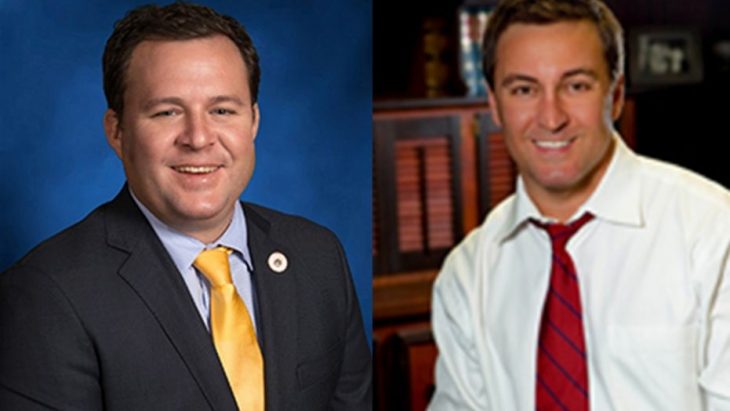 Rep. Stuart Bishop (left) and Sen. Norby Chabert (right) got into a fistfight at a bar Tuesday night over a dispute about a bill.

Rep. Stuart Bishop (left) and Sen. Norby Chabert (right) got into a fistfight at a bar Tuesday night over a dispute about a bill.

Two Louisiana lawmakers reportedly decided to settle a dispute over a piece of legislation the old fashioned way.

The argument between state Rep. Stuart Bishop and Sen. Norby Chabert started Tuesday morning, and ended with Chabert throwing several punches at his colleague at a local bar later that night, according to the News Star.

“We had a gentleman’s disagreement and settled it with our hands,” Bishop said.

The bill in question was not disclosed.

Police were called to the scene, but by then the two lawmakers had already left. No arrests were made, the paper reported.

Bishop, who blocked a Chabert-backed bill, said he was punched several times and only sustained a few bruises. He said he did not return the shots from his colleague, according to the paper.

Both men have since apologized for their actions.

“I grew up in this chamber and in no way would I want to disparage anyone here,” Chabert told fellow senators on Wednesday, according to the paper. “We’re both better men than that and I humbly apologize.”

While Bishop echoed those sentiments, he also used the opportunity to have a little fun.

“The next time it will be dueling guns,” Bishop joked.

Gov. John Bel Edwards said although the incident doesn’t “exactly reflect well on the House or Senate or state government,” he believes “it’s something we can all get past.”

“They’re both good friends of mine and they are good friends with one another,” Edwards said on his monthly call-in show, according to the paper. “Every now and then people get too passionate and things can get out of hand.”